The Bird and the Elephant 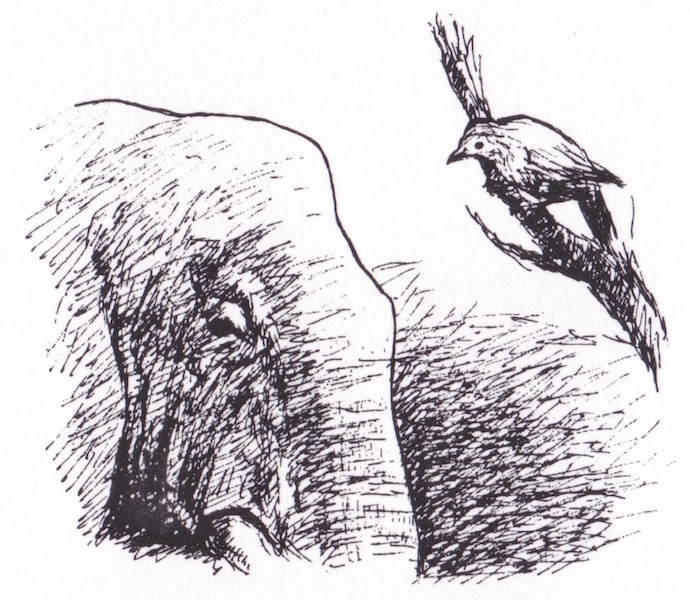 Once upon a time, there was an elephant. He was very big and very proud. He was selfish, too. He did not think about the small animals in the forest.

"I'm the most important animal of all," he said. "I don't care about you."

The frogs in the river were frightened of the elephant.

"Here he comes," they said to their children. "Run away! The elephant will tread on you and kill you."

The birds in the trees were frightened too.

"The elephant’s coming," they said to each other. "He'll knock down the trees. We must fly away!"

One little bird did not hear the others. She was looking for a good place to build her nest.

A river ran through the forest and a big tree grew beside it.

"I will build my nest there," thought the bird.

She worked hard and soon her nest was ready. She laid six beautiful eggs in it. She sat on the eggs all day and all night. She was keeping them warm.

One day, the bird heard a noise.

She looked at her eggs. There was a hole in one of them. She looked at the others. All the eggs had holes in them. The chicks were coming out.

The bird was very happy. She had six little chicks now. She was very proud of them. 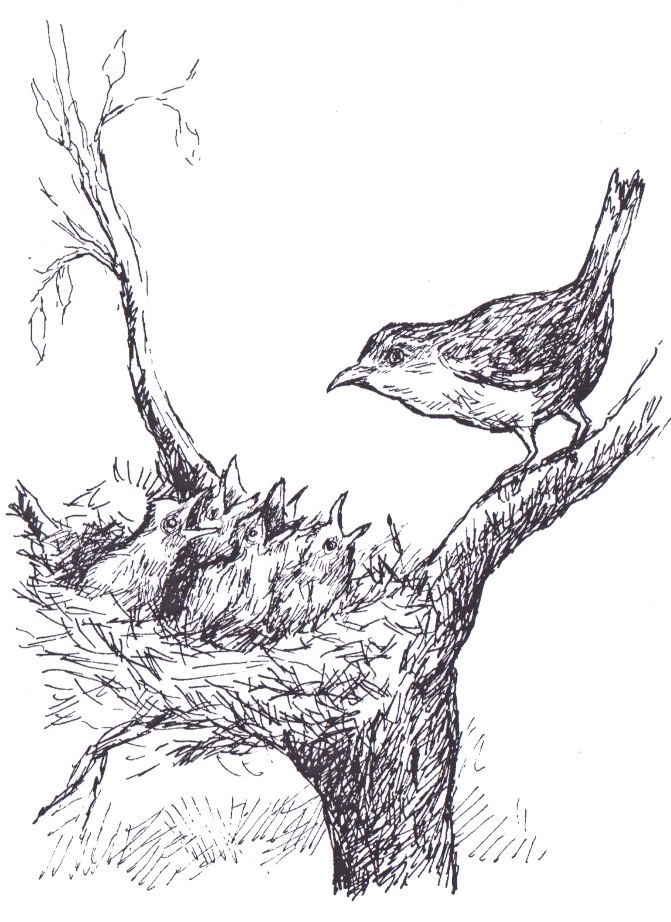 But the chicks were hungry. They opened their beaks and cried out for food.

"Wait, my little ones," their mother said to them. "I will go and find some food for you."

She flew away and began to look for food.

It was a hot day, and in another part of the forest the elephant was thirsty.

"I'll run down to the river," he thought, "and drink some water."

The elephant came to the tree near the river. He was happy. He wanted to drink the water and wash himself.

"Ah! Water!" he roared, and waved his trunk.

The end of his trunk hit the bird’s nest. The nest fell out of the tree on to the ground. The baby birds cried out, but the elephant did not listen. He did not care. He lifted his big foot and trod on them. The baby birds all died.

The elephant ran into the river and began to drink. The frogs were frightened.

"You're treading on us! Be careful!" they shouted.

But the elephant did not listen to the frogs.

Soon, the mother bird came back. She had caught some insects. She flew up to the tree to give them to her babies, but the babies were not there. The nest had gone.

The mother bird looked down. There, on the ground, was her beautiful little nest. And in it were the bodies of her poor dead babies.

The mother bird began to cry.

"That wicked elephant did this!" she said. "He killed my babies! I can see his footprints on the ground."

The elephant was still drinking water and bathing in the river. The mother bird flew down to him.

"You cruel elephant!" she said. "You've killed my beautiful chicks!"

The elephant lifted his head from the water.

"But my babies!" cried the mother bird. "All my beautiful babies! They’re dead!"

The little bird was very angry.

"You are cruel and selfish," she cried, "and I will punish you."

"You, a little bird, will punish me, an elephant?" he said. "Don't be stupid. Now be quiet, or I will start to be angry."

The mother bird flew away into the forest.

The other birds heard her. They flew to her. Soon, a big crowd of birds was listening to her story.

"That cruel, wicked elephant," they all said. "Yes, we want to punish him. But how can we do it? He is so big and we are so small."

"We are small," the mother bird agreed, "but we can fly. Let’s wait until tomorrow morning. The elephant will go to the river again. We’ll fly round his head and peck out his eyes."

The next morning, the birds were waiting in the tree. They heard the elephant. He was running to the river. They began to fly round his head and peck his eyes.

"Stop!" cried the elephant. "You're hurting my eyes."

"You didn't stop," said the mother bird. "My babies called out to you, but you didn't listen. You killed them all."

The birds went on pecking at the elephant’s eyes. He was blind now. He couldn't see any more.

The mother bird flew down to the water.

The frogs heard her. They came out of the water and listened to her story.

"We want to punish the elephant too," they said. "He treads on us and our babies. We call to him, and he doesn't care. But he is so big, and we are so small. What can we do?"

"Jump out of the water and follow me," said the mother bird.

So the frogs jumped out of the river and followed the mother bird. She took them to the edge of a big cliff.

The frogs began to sing. They sang loudly.

The elephant heard their song.

"I can hear the frogs," he thought. "Frogs are always near water. I'll go to them. I must have water to cool my eyes."

He ran towards the frogs, and fell over the cliff. The birds and the frogs were happy.

"Our enemy was selfish and cruel," they all said, "He was big and we are only small. But we worked together and we won."

Exercises for The Bird and the Elephant