How would you answer these questions:

Tef is a cereal that grows in Ethiopia

There was once an ignorant man with a very clever wife. The man loved his wife, and she loved him, and they lived happily together.

A clever man lived near this happy couple, but this man’s wife was an ignorant woman. He did not love her and they were not happy together. The clever man saw his neighbour’s clever wife and he was jealous.

He thought about his neighbour's wife for a long time, and then he went to visit him.

"Listen, neighbour," he said. "I know that your wife is a very clever woman. But I will be honest with you. You are not clever at all. In fact, you are very ignorant."

The ignorant man said nothing.

"But you know me," the clever man said, "I’m very clever. I’m well educated. You know my wife too. She’s not clever at all. In fact, she’s ignorant, like you. Let's exchange our wives. I will have your wife, and you can have mine. We will all be happier."

"What?" he said. "You want to take my wife? You think that I’m ignorant? But I'm not ignorant at all! I'm as clever as you are."

The other man laughed.

The ignorant man was unhappy now.

"Oh, my dear wife," he thought. "I don't want to lose her. What kind of questions will the judge ask me? Will I be able to answer them?"

The two men found the judge. The clever man explained everything to him.

"You say this man is ignorant?" he said, and he pointed to the ignorant man.

"Yes, yes," the clever man said. "Ask him questions. You will see. He doesn't know anything."

The judge thought for a moment.

Then he said to the ignorant man, "Tell me, sir, how many stars are there in the sky?"

The ignorant man's mouth fell open. He shook his head. He didn't know the answer.

"Here's another question," said the judge. "Where is the navel of the earth?"

"My questions are difficult," the judge said. "Think about them. Come back tomorrow and give me your answers then."

The poor man hurried back to his wife's house. The sun had set already and it was dark. He stood outside his house and looked up at the sky. He was trying to count the stars.

His wife came out of the house and found him there.

"What are you doing, my dear husband?" she said. "Come and eat your supper. It's all ready for you."

Her husband told her everything. He told her about his clever neighbour, and the judge, and the judge's questions. When he had finished, the woman laughed.

"Don't worry, dear husband," she said. "I will give you the answers to the judge's questions. Now come inside and rest."

The next day, the clever man came to the ignorant man's house. He stood outside and called to him.

"Well, neighbour," he said. "Are you ready to see the judge?"

The ignorant man called back to him, "Oh yes! I am quite ready."

His wife gave him a basket of tef and a spear. Then he went outside, and the two men hurried off to see the judge.

"Now," the judge said to the ignorant man. "Let's hear the answer to my first question. How many stars are there in the sky?"

The ignorant man poured out the grains of tef on to the ground.

"The number of stars in the sky," he said, "is the same as the number of grains in this basket of tef. Don't you believe me? Then you must count them yourself."

"That's a good answer," he said. "Now here's the second question. Where is the navel of the earth?"

The ignorant man picked up the spear and stuck it into the ground in front of the judge’s feet.

"The navel of the earth is here," he said. "Don't you believe me? Then dig into the ground and you will find out."

The clever man was angry.

"He's not clever! He's stupid!" he said. "He didn't find the answers to these questions. Someone helped him."

"Is this true?" said the judge. "Did someone give you the answers to my questions?"

"You're right," he said. "This man is not clever at all. His clever wife needs a clever husband. Go home now, both of you. Get ready to exchange your wives."

The ignorant man was very unhappy. He went home with tears in his eyes.

"My poor husband," his wife said. "What has happened? Why are you sad?"

"I'm sad because I'm stupid and ignorant," the poor man said, "and because I've lost my dear wife."

And he told his wife everything.

His wife tried to comfort him.

"Don't worry, husband," she said. "You haven't lost me yet. Go and see our clever neighbour. Tell him you have agreed. You will exchange your wives tomorrow. Then invite him and the judge to a meal here, at our house."

"I don't understand," her husband said. "That won't help us at all."

So the ignorant man invited his clever neighbour and the judge to come to his house, and the next day they came.

"Wife!" he called out. "Our guests are here. Bring them some food!"

His wife brought out a beautiful basket and a pot made of gold.

The woman opened the basket and offered bread to the judge. But the bread was black and burnt.

"What's this?" the judge said.

Then she brought out some chicken stew.

"Please, have some stew," she said to the clever man.

"But this is terrible," the clever man said. "This chicken still has its feathers."

"You don't like my chicken stew?" said the woman. "But I always make it like this. I never take off the feathers." 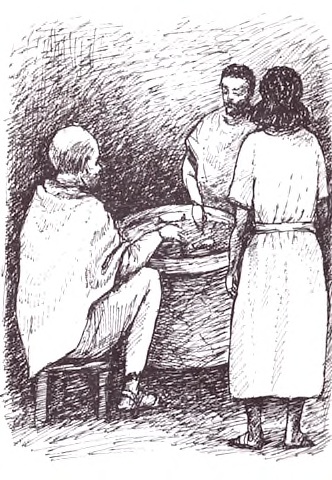 The judge tried to eat a little bread and stew, but soon he stopped.

"Now," he said. "Let's finish our business. It's time to exchange these women."

But the clever man stood up.

"What?" the judge said. "Don't you want this clever woman?"

"Clever?" the clever man said. "She's not very clever at all. Let her stay with her ignorant husband. My wife is ignorant, but her bread is never burnt and her chicken stew is always delicious."

The judge and the clever man went away. The ignorant man and his clever wife laughed and laughed.

"Now," the clever wife said, "it's dinner time. Come, my dear husband, your food is ready."

She threw away the burnt bread and the horrible chicken stew. And she brought out the lovely dinner that she had cooked for him.

"Oh my dear wife, you are so clever," her husband said. "You deserve a better man than me."

"But you are the best man in the world," his wife said. "And I will always love you."

And they lived happily together from that day on.

Exercises for The Clever Woman