Injera is a kind of flat bread made from the cereal tef.

Wot is a thick stew, served on injera. 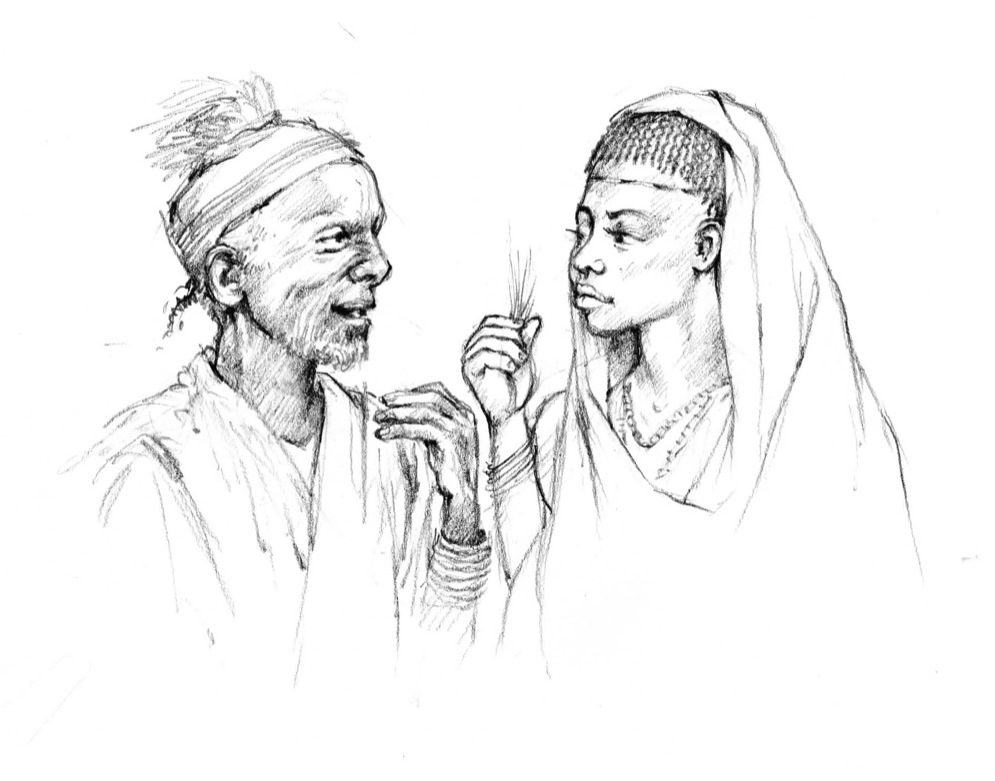 A woman had a cruel husband. He shouted at her, and he beat her. He never spoke kindly to her.

"What can I do?" the woman thought. "I'm a good wife. I make injera and wot for my husband. I work hard in my house. I am never angry with my husband. But he always beats me. Why? What have I done?"

She went to see her family.

She went to see her neighbours.

"My husband is always angry," she told them. "Why is he so cruel to me?"

Everyone gave the woman advice.

"Give him more food to eat," one person said.

"Don't give him so much food," said another.

"Talk to him more," a third person said.

"Don't say anything to him," said someone else.

At last, another woman said to her, "Go to see the wise man. He has good medicines. Ask him to give you some medicine for your husband."

So the woman went to see the wise man.

"Please sir, help me," she said. "My husband beats me. I need to give him some medicine. Then, perhaps, he will be kinder to me."

The wise man shook his head.

"I can't give you any medicine yet," he said. "First, you must go and steal the whiskers of a lion. Bring them to me. Then I can help you."

The woman was very frightened.

"Steal a lion's whiskers?" she thought. "How can I do that?"

She went home slowly. She was thinking.

The next day, her husband went off to work in his field. The woman chose a big goat from the flock and killed it. Then she carried some of the meat away from her house, and climbed a tree.

Soon, a lion came and lay down under the tree. The woman cut off a piece of meat, and threw it to the lion. The lion roared when he saw the woman, but he took the meat, and ate it hungrily. The woman threw more meat to the lion. It ate that, too.

The next day, the woman came back to the tree with more meat for the lion. The lion roared again, but his roar was quieter now. This time, the woman didn't climb very high. She gave the lion one piece of meat after another, and the lion ate them all.

On the seventh day the lion finished eating, then he lay down on the ground and went to sleep. The woman waited in the tree. Then she threw a stick at the lion. The lion did not move.

Very quietly, the woman climbed down from the tree. She went to the lion, and pulled the whiskers from his face. Then she ran all the way home.

The next day, she took the lion's whiskers to the wise man.

"Look," she said. "Here are the whiskers of a lion. Now will you give me some medicine for my husband?"

The wise man took the whiskers in his hand.

"How did you get these?" he asked the woman.

"Well," she said. "I waited quietly in a tree, and every day I threw the lion pieces of meat. At first, he roared at me, but then he began to trust me. At last, he fell asleep, and I took the whiskers from his face."

"You’re a clever woman," he said. "You have tamed a lion. Now you can tame your husband. Be clever with him, like you were with the lion. Soon you will tame him, too."

Exercises for The Lion's Whiskers