The Girl from the Sea 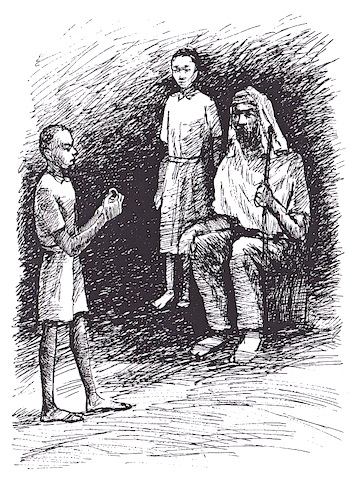 In the good old days, there was a poor boy with a kind heart. He liked to help other people, and he never thought about himself.

One day, he saw a man beating a dog.

The man was angry.

The boy was sorry for the dog. He had only a little money, but he gave it to the man. Then he took the dog home with him.

A few weeks later, the boy saw a woman beating a cat.

"This cat's a thief," the woman answered. "She ate my chicken."

The boy was sorry for the cat. He gave the woman some money, and took the cat home.

A few weeks later, the boy was coming home from market. A beautiful girl ran up the road towards him.

The boy was frightened, but he didn't run away.

He picked up some stones and threw them at the hyena. One of them hit the hyena's head and killed it.

"Oh thank you, thank you!" said the girl. "Come home with me and talk to my father. I will tell him that you saved my life. He will reward you."

Now, the girl was a demon's daughter, and the demon, her father lived under the sea. She took the boy down to the seaside, and threw him into the water. She jumped in after him, and together they sank to the bottom of the sea.

They went into the demon's house.

"Father," the girl said, "this boy saved my life. A big hyena was chasing me, and he killed it."

The demon looked at the boy.

"Did you really save my daughter?" he asked.

The boy nearly said, "Yes, with God's help," but he remembered the girl's words.

"Did you really kill the hyena?" asked the demon.

The demon smiled at him.

The demon's daughter smiled at the boy too.

"Look after Atli well," she said. "It will be a good servant to you."

The boy thanked the demon and his daughter, and said goodbye to them.

At once the ring took him to his house. His mother was waiting for him, with the dog and the cat.

"Where have you been?" she said.

The boy told her about the demon and his daughter.

"We are rich now, Mother," he said. "The demon gave me a magic ring. Listen to this. Atli, bring us food."

At once, there was a beautiful meal on the table, with enough food for the boy, his mother, and the dog and the cat.

The boy and his mother were happy now. They had a beautiful house, new clothes and good food to eat. But the boy wanted more.

"The king has a beautiful daughter," he said to his mother. "I want to marry her."

His mother was worried.

"But we are from a poor family," she said. "We don't know the king. How can we ask him for his daughter?"

The king heard her.

"She wants your daughter," his servants said, and they laughed.

The servants brought the boy's mother to the king.

"You want my daughter for your son?" said the king. "Then he must take a test. He must bring gold to the palace and make clothes from it. Can he do this?"

"Forget the king's daughter, my son," she said. "If you want to marry her, you must take gold to the palace and make clothes from it. How can you do that?"

At once, the ring brought gold.

"Now take me to the palace," said the boy.

A minute later, he was in the palace, with the gold beside him.

"Atli, make a gold dress for the king's daughter," said the boy.

At once, a beautiful gold dress was in his hands.

The king was very happy with the boy. He gave his daughter to him, and the boy married her.

On their wedding day, the boy gave Atli, the gold ring, to his wife.

The boy loved the king's daughter, and she loved him. They lived together happily.

One day, a beggar came to the boy's house.

The king's daughter came out of the house with food in her hands, and gave it to the beggar. The beggar saw the ring on her finger.

He pulled the ring off the girl's finger.

At once the ring carried him back to his home at the bottom of the sea.

The boy and his wife had no more food and no more gold from Atli, but they lived together happily, with the dog and the cat, for the rest of their lives.

Exercises for The Girl from the Sea