Inset is a kind of false banana plant that many people in Ethiopia eat. 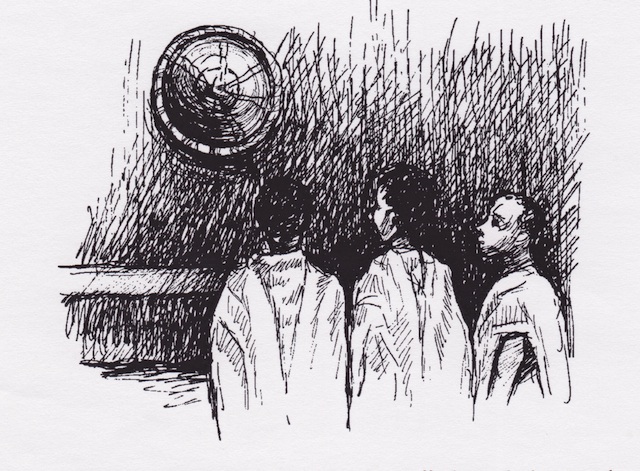 In the old days, in Sidama, there was a man with three sons. He was a good man, but he had an enemy. This enemy was a merchant. He cheated the good man, and stole things from him.

After many years, the father became old. He could not look after his cattle or work in his fields now. He was tired.

He called his sons to him.

"What's that, Father?" his sons asked him.

The three brothers looked at the shield. It was hanging on the wall, above their father's bed. They all wanted it.

"I can only give it to one of you," their father said.

His sons looked at each other.

"Will you give it me, Father?" the oldest brother asked.

"Or to me?" asked the second brother.

"Or to me?" asked the youngest one.

"I don't know," his father said. "I'm going to give you a test. I want you all to go away from home. Travel to many places. Go to cities, towns and villages. You will meet many people on the road. Be kind. Remember, kindness is the greatest thing of all. After your journey, come home. Then I will decide."

The three brothers obeyed their father. They said goodbye to him, and went away. Their father lay in his bed, under the shield, and waited.

At last, his three sons came home. They stood beside their father's bed.

"Oh Father," the eldest one said. "I saw wonderful things on my journey. I saw the sea, and great rivers, and..."

"Yes, yes, my son," his father said. "But were you good? Were you kind to people on the road?"

"Oh yes, Father," his eldest son said. "One day, I was passing a river. A mother was there with her little child. The child ran away from her and fell into the river. Big crocodiles were swimming towards the child, but I jumped into the water and saved it. Wasn't that kind?"

His father smiled at him.

"Yes, it was kind," he said. "But it was your duty. Everyone wants to help a mother and her child. Now, my second son, tell me about your journey."

"Well, Father," the second son said, "I passed through forests, and saw lions, and leopards, and..."

"That's good, my son," his father said. "But did you meet people? Were you kind to them?"

"Of course, Father," his second son said. "One day, I was walking through a valley. It was a lonely place, in the middle of the mountains. I met a rich man there. He had a hundred silver dollars in a bag. He said to me, 'I want to visit my relatives in a village near here, but I don't want to take my money with me. Please look after it for me.' I agreed. I sat beside the road and kept his bag of silver dollars for him. I didn't steal it, and run away. After a long time, he came back. He wanted to give me ten dollars. 'No,' I said. 'This is your money. I don't want any of it.' I was kind, Father, wasn't I?"

"Oh Father," his third son said, "I went into the mountains, and I saw deep gorges, and..."

"But who did you meet?" his father asked. "Were you kind to them?"

"Well, Father," the youngest son said. "One day, I was walking in the high mountains. I saw a man there. He was asleep. He was lying near the edge of a deep gorge. 'If he turns, he will fall,' I thought. 'I must wake him, and bring him back from the edge.' I went near him, and then I saw that it was our enemy, the merchant. He has cheated you and stolen your money for many years. But I didn't stop. I woke him, and brought him back from the edge of the gorge."

His father smiled at him.

"My son," he said, "you did a very good thing. You showed true kindness. That man hates us, but you saved his life. You forgave him, and didn't try to punish him. The shield of my fathers is yours."

Exercises for The Father's Shield