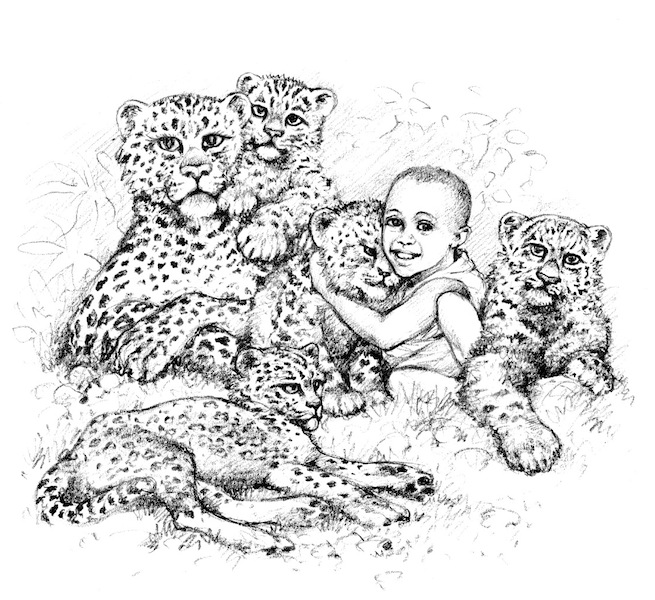 A hungry leopard needed meat for her cubs. She tried to catch a bushbuck, but it ran away. She tried to kill a cow, but the men threw their spears at her.

At last, she came to a house. A woman came out of the house with her water pot.

And she went down the hill to the river.

"A fat little child," thought the leopard. "My cubs will like to eat him."

She pushed open the door and went into the house. The little boy was not afraid. He looked at the leopard and smiled. She picked him up in her mouth and carried him back to the forest.

"Children!" she called out. "Come! There is something good to eat!"

Her children heard their mother and ran towards her. The little boy liked the leopard cubs. He laughed at them. He wanted to play with them.

The leopard looked at the little boy.

"His eyes are beautiful," she thought. "They are like my cubs' eyes. He is young, like my cubs. I can't kill this child. I can't eat him."

The leopard's cubs grew fast. They learned to hunt. One day, they ran away from their mother, and began to live alone.

The leopard was tired now.

"I can't keep you, my dear child," she said to him at last. "I am growing old. I can't catch enough meat. I give you everything, and then there is nothing for me. I will take you home to your parents. They must look after you now."

So the leopard took the boy to his parents' house. She said goodbye, and left him at the door.