This is a long story, in three parts. Answer the questions after each part of the story before you read the next part.

The word "inset" in this story means a kind of false banana plant that some people in Ethiopia eat.

Injera is a kind of flat bread made from tef. 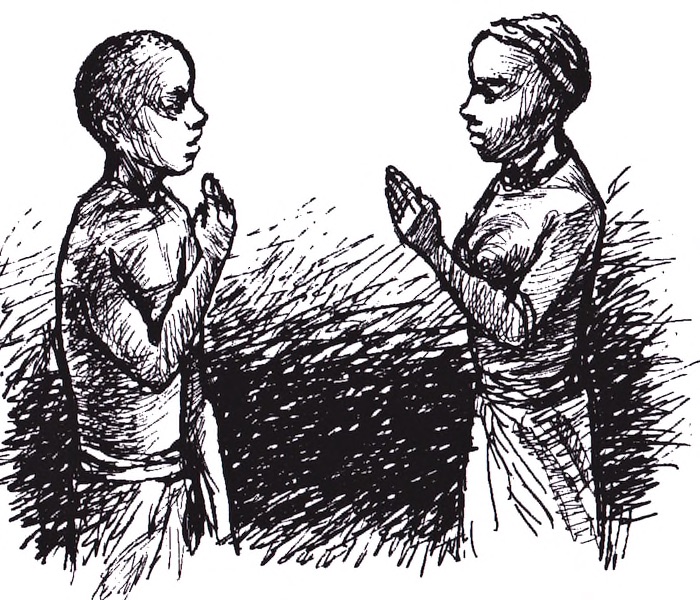 A man and his wife had two children, a son and a daughter. One sad day the two parents died. The children were alone now. The girl looked after the house, and the boy looked after the cattle.

Every day, the boy took the cattle to the river, and the girl went out to look for food. Then a hyena came to their house. She cooked inset for them, and left it for their supper.

"Who is doing this?" the girl asked her brother one day. "Who is leaving this food for us to eat?"

"We must find out," her brother answered. "Tomorrow, you will take the cattle to the river, and I will climb into the tree beside our house and hide."

So the next day, the girl took the cattle to the river, and her brother climbed the tree and hid. Soon, the hyena came. She began to cook. But she did not use the girl's cooking pot, or her spoons. If she wanted a cooking pot, she called out, "Cooking pot! Come to me!" and a pot flew to her through the air.

If the hyena wanted a spoon, she called out, "Spoon, come to me!" and a spoon flew into her hand.

Then the hyena called for a knife, and a pot of butter, and wood for the fire. Soon the food was ready.

The boy was watching. He was frightened.

His hands shook, and the leaves of the tree shook too. The hyena heard the noise. She looked up, and saw the boy.

"Come down here," she said.

The boy came down from the tree. The hyena talked to him. She was kind to him.

"Don't be frightened," she said. "I will not hurt you. I'm your friend. You are a strong, handsome boy. I want to marry you. I will bring you delicious food every day. You will have inset, and meat, and milk."

The boy looked at the hyena. Her smile was full of magic.

"I want to marry you," he said, "but I can't. I live with my sister. She hates hyenas. She will never agree."

"Talk to her," the hyena said. "She will listen to you. I will hide in the store room. Call me when you are ready."

So the hyena hid in the store room. Soon, the girl came home with the cattle.

"What happened?" she asked her brother. "Who brings our food every day? Did you see them?"

"Yes," her brother answered. "It was a kind hyena."

His sister was frightened.

"This one is good," her brother said. "She is waiting to meet you."

He called out, and the hyena came out of the store room.

The girl looked at her. She was frightened.

Then she looked at her brother.

"Her magic is working on him," she thought. "I must take him away."

That night, she talked to her brother.

"Don't you understand?" she said. "This hyena is not good. She's a witch. She will marry you, and then she'll eat you. Please listen to me, dear brother. We must run away!"

She talked for a long time. At last, her brother agreed. He went to the cattle pen, and opened it. Then he quietly drove the cattle into the forest.

"God will help us," his sister told him. "Perhaps we'll be safe in the forest."

So the brother and sister began to live in the forest. Other boys were living in the forest. They were looking after cattle too. The boy became their friend.

Exercises for The Hyena Woman Part One